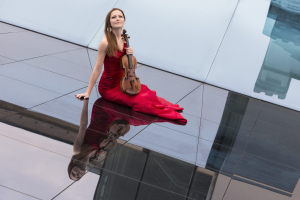 She has performed in most countries of Europe, as well as Africa and the United States. Her festival appearances include the Festival of Music in Prague, Prague premiere, Copenhagen Summer Festival, South Bohemian Chamber Music Festival, Hindsgavl Festival, the renowned Festival Internacional de Santander in Spain and the Bergen International Festival in Norway. In 2012, she made her debut as the first Czech solo violinist at the famous Danish Tivoli Festival in Copenhagen.

She regularly records for Czech and Danish Radio. She took part in the rotation 2 CD ArcoDiva for the company, and in the spring of 2014 she will release her debut CD by Danish music label DACAPO.
She plays Italian viola "Carlo Antonio Testor - 1745 Contrada" and her bow is from the studio master Petra Auředníka.