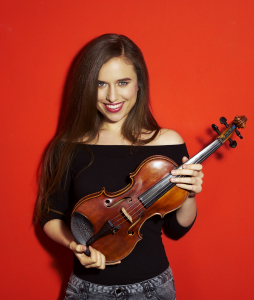 Since winning the international radio competition 'Concertino Praga' 2010, Julie Svěcená has been extensively performing in Europe, Asia and USA.

Julie has performed at festivals such as Cambridge International String Academy (UK), Zakhar Bron Academy (Swittzerland), Janáček May (Czech Republic), Radio Autumn, Moravian Autumn, Smiřice Easter Music Festival, Klášterec Musical Springs Festival or Czech Touches of Music.
In 2014, she got the opportunity to perform at the prestigious Prague Spring International Music Festival and was the youngest performer to present a separate recital that year.

She started study the violin in Czech Republic, her native country, at the age of four in class of Hana Metelková. In 2013 she graduated at the Prague Conservatoire in the class of renowned Czech pedagogue and chamber musician Dana Vlachová (Czech Trio).

Julie is now pursuing her violin studies at the Royal Academy of Music in London, in the class of Mr. Rodney Friend MBE.

In 2015, she succeeded at an audition and took part in the London Symphony Orchestra String Experience Scheme.

She has made recordings for the Czech Radio, Classic FM, Radio Wave, and BBC Radio 3 in London. She has also performed at numerous occasions and concerts live broadcasted by the Czech Television, TV Nova, TV Prima and TV Barrandov.

Her debut CD titled JULIE, for which she recorded works by J. Brahms, P. de Sarasate, M. Ravel, O. Ševčík, F. Ondříček, and E. Ysaÿe at the age of sixteen, was released in 2010. For this recording, she collaborated with one of the best Czehc pianists of his generation Václav Mácha, with whom she performs regularly as a recital duo across Czech Republic and abroad.