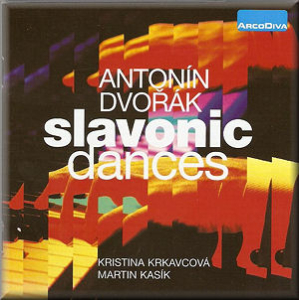 Dvorák looked to the precedent of Brahms’s Hungarian Dances when the Berlin publisher Simrock invited the Czech composer to write a book of Slavonic Dances. Indeed it was the obvious place to look, something Fritz Simrock had himself suggested in his invitation. Simrock asked for something ‘light, but not too light, but brilliant, flashy, with shifting moods and colours’. Given the huge popularity and near-ubiquity of the orchestrated versions of both Hungarian and Slavonic Dances, it’s easy to overlook the fact that both works were originally written for piano, four-hands.

Orchestration of the piano originals followed soon afterwards, and it’s in this form that we usually hear the Dances. However there have always a few recordings of the original piano versions in the catalogue. Those with longish memories will remember the (unlikely seeming?) Brendel and Klien Turnabout LP. And they were followed by the Vlastimil Lejsek and Vera Lejsková Supraphon LP in the mid 1970s and by the Kontarsky brothers on DG, amongst others. But even more recently you could choose between the Labèque sisters on Philips, the Noke-Krizos duo on Hyperion and Christian Kohnno and Silke-Thora Matthies on Naxos. A really fine addition to the discography, and a particular favourite of mine, came from the Prague Piano Duo on Praga 250151 – highly recommended for its vitality.