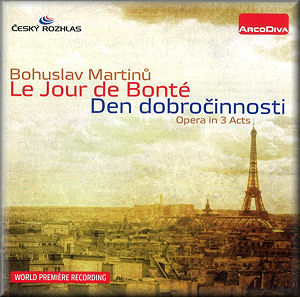 The Day of Charitywas an opera that Martinu was working on in Paris in 1931 around the time of his wedding. Its story concerns two French peasants who hear that a day of charity has been declared in Paris so they go to the capital to find needy people for whom to perform good works. However, nothing goes quite to plan: among their many adventures a beggar rejects their offering, a traffic conductor tells them off for getting in the way and a suicidal girl berates them for preventing her longed-for death. After an altercation with some women they are arrested and wake up the next morning back in their village. Perhaps the whole thing was just a dream?

Martinu was writing the opera with the hope of getting it staged by a French theatre, but any prospect of this seems to have evaporated and, in April 1931, he broke off writing half-way through the first act and never took it up again. This world premiere recording gives us the score as the composer left it. It’s infuriatingly incomplete and breaks off just after the half-way mark of the story, but conductor Václav Nosek, whose pet project the reconstruction was, must have felt that a solid half was better than nothing at all.

The score was unpublished in Martinu’s day and it was Nosek who undertook the research and puzzle-solving required to piece it together into a performing version. He also gave it its first staging in Budejovice in March 2003 but died before the making of this recording. The present conductor, Milan Kanák, dedicates the recording to him and cites him frequently in his informative notes to this issue.