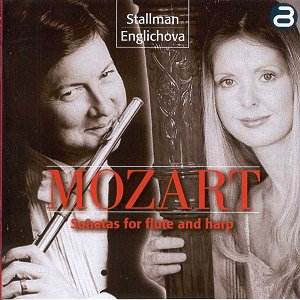 Surprisingly enough, these works were written in London by the eight year old Mozart and dedicated to Queen Charlotte. An engraved copy of them was presented to Her Majesty on January 18, 1765, eleven days before Mozart’s ninth birthday. The very musical George III was in a lucid mood at this time, not yet having managed to misplace the North American colonies. He enjoyed setting musical challenges for Mozart, even hailing him in the street as an old buddy from his passing carriage. During the composition of these works, Mozart would "...sometimes run about the room with a stick between his legs by way of a horse." I think that even at 8 years old, Mozart when putting a stick between his legs was not thinking of a horse, but, be that as it may, he had astounded everyone he met in London by his amazing precocity in composition and (musical) performance. At this time he also met, and began his legendary friendship with, J. C. Bach, 20 years his senior.*

These sonatas are rarely performed or recorded by violin and piano although there was a recording for oboe(!) and piano. This is probably the first performance ever for flute and harp. Arrangement of these sonatas was not necessary, as the flute can play from violin music and the harp can play harpsichord music note for note. Although Mozart later in his life disdained the flute, it is difficult to take him too seriously on this point because his writing for flute is so affectionately idiomatic, as in these sonatas. One does not hear these works, here played on the flute, as necessarily intended for any other instrument.