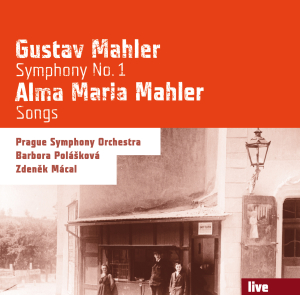 Ever since I first saw Zdenĕk Mácal, coaxing the jaded New York Philharmonic of 1976 into polished performances of Romantic warhorses, he's been one of my favourite conductors. His career, however, has been the sort that, in those pre-Internet days, was hard to follow from afar: a scattershot discography (CfP, Koss Classics, Delos); a few mid-tier directorships Stateside (Milwaukee, Newark); and a stint with the august Czech Philharmonic, from which he resigned abruptly during his fourth season. As the present concert recording of the Mahler First shows, nearly forty years later, time hasn’t dimmed the veteran conductor's illuminatinginsights.

First of all, Mácal makes a point of clarifying details - of articulation, of counterpoint, of orchestration - frequently taken for granted. In the spacious first-movement introduction, for example, he sees to it that we can hear the third trumpet continuing beneath the woodwinds at 1:43. Similarly, in the Scherzo, the upwardly rushing string chords at 2:58 are brilliant, because Mácal has the second violins and the violas play as energetically as the firsts. In the Finale, you actually hear and feel the string run resolve at 1:07, just before the first subject proper - a resolution usually covered by the punctuating chord. Such expository details could have amounted to so much auditory clutter; here, however, they enhance the musical and emotional richness.