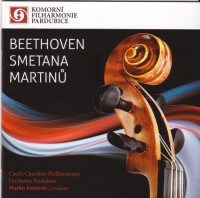 In his review of a previous release by these forces, Rob Barnett avoided contortions to rationalise the programme — Beethoven’s First Symphony, Martinů’s Concerto for oboe and Small Orchestra and Kabelac’s Symphony No.4 in ACamerata.This latest disc wears a similar look, though less adventurous perhaps, but I feel I need to add a caveat. Great was the reviewer’s excitement when he spied that we would hear Smetana’sFestiveSymphony. I only wondered about two things; would it get close to the classic Šejna recording of 1967, and what sort of lick would the orchestra have to go to fit it in alongside Beethoven’s Second Symphony and Martinů’s Sinfonietta La Jolla? Well, great was his disappointment when he opened the booklet to find that he would actually only get the Scherzo from the Symphony. So, whilst I appreciate that this disc is a showcase for the chamber orchestra, with a major Beethovenian symphonic statement balanced by the Sinfonietta and added pep provided by the extract from theFestive, nevertheless I think it’s a missed opportunity. Wouldn’t we prefer the Festive in full, rather than a movement from it?

As before though, the Pardubice chamber orchestra acquits itself well in Beethoven, if without quite the maturity and rhythmic insight provided by, say, Charles Mackerras in his survey of the complete symphonies, majorly with the Scottish Chamber Orchestra. I rather miss the ‘hard stick’ percussion that gave such dynamism and crispness to Mackerras’s attacks, as well as the sense of kinetic nervousness and energy that drives the music forward. And so, after all that expectation, how does Marko Ivanovic’s reading of the Festive Symphony Scherzo measure up? A bit portly and slack after Šejna, unfortunately. It lacks swing and verve, and rhythms are far too ponderous.