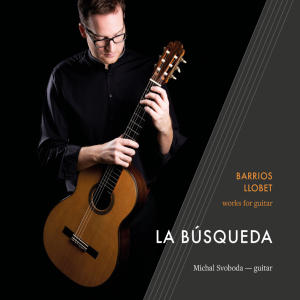 On this impressive and satisfying disc (the title translates as “The Quest”), Czech guitarist Michal Svoboda splits the 15-track program between just two composers: Agustín Barrios and Miguel Llobet, who were contemporaries who lived and (mostly) worked thousands of miles apart (in South America and Spain respectively), yet definitely seemed to share similar late-Romantic leanings and affection for the folk music of each’s homeland. They make for a good match on this album, which contains fine versions of many popular numbers, such as Barrios’ Danza paraguaya No 1, Choro da saudade, and Un Sueño en la Floresta, and Llobet’s Romanza and six of the 15  Canciones populares Catalanas, including the sublime El noi de la mare and Cançó del lladre. Llobet’s variations on  a theme by Sor, which closes the disc, feels slightly out of place stylistically with most of what precedes it, but it does give Svoboda the opportunity to to display his considerable skills as a virtuosic guitarist.