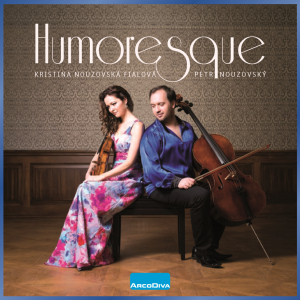 The husband and wife team of violist Kristina Nouzovská Fialová and cellist Petr Nouzovský have chosen a rather short 48-minute recital that presents one classic in the shape of Beethoven’s ‘Eyeglasses’ duet, Dvořák and Piazzolla arrangements, and four premiere recordings of Czech music.

The first premiere is Roman Haas’ Duet No.1, a five-movement work with much thematic interrelation. Haas’ lively and imaginative writing embraces a rather beautiful, taut lyricism, as well as off-beat and asymmetric vitality. An adherent of dance rhythms, Haas includes a particularly exciting Bolero for the two string instruments and ends with engaging decisiveness. Haas’s Variations on a Folk Song opens with the theme followed by four variations, the last of which is a tasty Czardas. The warm Moravian theme with its idyllic rustic keening establishes a plangent and rather beautiful mood that is perfectly sustained in the contrastive variations that follow...