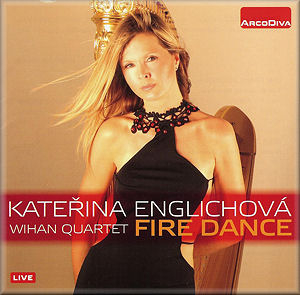 As so often these days a live recording only announces itself at the very end, with applause. For the duration you simply wouldn’t otherwise know, so I suspect skilful editing has removed extraneous shuffling and spluttering. Not that there would have been much, given the June date, and the rarefied atmosphere of the performances which call for concentrated listening. A solo harp recital may promise vulnerability but actually the opposite is often true with opportunities for virtuosic runs, evocative colour and the added tapestries of collaborative partners – here, the Wihan Quartet.

The programme, as Katerina Englichová admits in her booklet note, caused her some concern given that she wanted to construct a concert that was personal to her. Two are very closely associated with her and all are part of her core repertory. Lukáš’sPer tutte le corde– Quintette for harp, two violins and cello, was actually written for her and she gave its premiere performance with the Kubín Quartet. It’s suffused with the composer’s folkloric affiliations, though this is never in danger of becoming too purely alluring. Lukáš ensures, as ever, that the percussive and the dappled are part of the aural landscape and this brief, two movement work has tremendously rapt expressive moments as well. There are some post-Martinu exultant and celebratory moments in the second movement where skittering excitement alternates with reflective contemplation.

Sylvie Bodorová wroteMysterioum druidumfor Englichová and the Chamber Music Festival in Tucson, Arizona. It’s for harp and strings, as with the Lukáš. The work is inspired by Celtic myth and bardology, and the three movement work celebrates them in sound. The first movement takes their trees as its central motif, and there’s fiercely evocative writing as well as one of her surging tunes – listen from around 3:40 (it’s tremendous). The second movement is calledVindobona, the name of a Celtic settlement in what is now Vienna. This sounds intriguingly like a very stripped-downTallis Fantasia– there’s a baronial elegance as well to the writing before bardic soliloquies for the strings. This unleashes a hell-for-leather finale in which Fire Demons prevail; the daemonic dance is infused with folklore once more and full of vitality and drama.