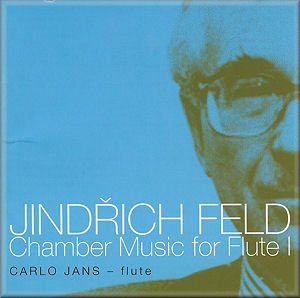 Carlo Jans has been an inspiring guide to Feld’s music for flute, and this disc inaugurates a series of three CDs devoted to the composer’s chamber music for that instrument. My last encounter with the Feld-Jans combination was in the shape of an Arco Diva concertante disc of music by Feld, Kalabis and Lukáš, and a marvellously invigorating affair it was.

Feld died in 2007 but he knew of the plans to make this series of recordings, and in fact his 2006 ‘foreword’ is reprinted in the booklet. It reads as if he might have heard the recordings, which suggests that they were made in 2006 or earlier, but there are no recording dates noted in the documentation, only locations.

What matters most is the music. This is a disc that offers up six works, written between 1963 and 2001. His customary facility and his wit are in evidence throughout. TheQuintetto capricciosowas written during 1994-95 for Susan Milan, another exploratory and hugely effective proponent of contemporary music for the flute. It opens in an intensely crepuscular way but thegiocosofeel is soon established and there are rippling, firefly moments aplenty, with the flute agile, the strings propulsive and the harp perfectly integrated into the soundworld. The Scherzino is everything its name promises: brilliantly fast and exciting, before slowing to a troubadour-like central panel, folksong escaping over tabor taps. We’re transported to the Bohemian Renaissance. The fluid precision of Feld’s writing is confirmed by the slow movement, a touchingly refined aria, before the finale banishes care, ultimately alluding to the folksong-and-tabor of theAria interottain a puckish close.