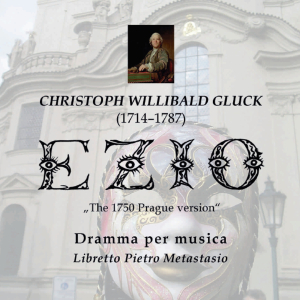 Gluck wrote Ezio for Prague at a time when the Bohemian capital was a renowned international centre for Italian opera. Ever since the coronation of Charles VI in 1723 composers from all over Europe had gone there to stage “Italian seasons”. These included Italians themselves – a Venetian company was one of the first – but also many composers from the Habsburg empire, most notably Mozart who premiered Don Giovanni and La Clemenza di Titoin the city. Gluck, who had studied at Prague’s Charles University, composedEziofor the 1750 carnival season. Many of its numbers were subsequently copied, so we can infer a success, and some of its tunes were even adopted for liturgical use at St Vitus’ Cathedral.Eziosoon fell off the radar, however, and it doesn’t seem to have done much business since. It’s appropriate, then, that this recording should come from the enterprising Czech label Arcodiva who recorded this live performance in 2010.

The opera is to a text by Metastasio, that doyen of 18thcenturyopera serialibrettists. It revolves around fairly typical themes of love triangles, mistaken assumptions and happily-ever-after conclusions, though in this case the denouement is so rapid as to be almost a parody of the convention! Gluck’s music for this, his fifteenth opera, is solid and dependable but, to my ears, shows little promise of the great genius his later years would produce. The arias are pleasant and easy on the ear and there are memorable turns, such as an effective “rage” aria for Massimo in the second act, and an energetic trio which rounds off that same act. Much of it is fairly forgettable, though, and it isn’t until Fulvia’s final aria where she envisions a terrible fate, that we get even a hint of the “reform” principles that Gluck was to put to such famously effective purpose in his later works.