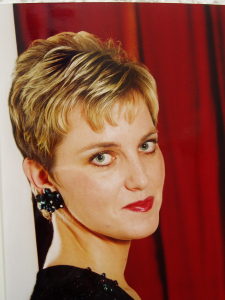 Sylva Čmugrová graduated from the Prague Conservatory and the Academy of Music in Prague. She attended master courses in Sienna (Italy) and in Liechtenstein (Vaduz). She is a laureate of the international singing competitions of Ema Destinnová in České Budějovice and Antonín Dvořák in Karlovy Vary, and a finalist of the competitions in Geneva and Milan. From 1996 to 2011 she was a soloist of the Prague State Opera, since January 1, 2012 she has been a soloist of the National Theatre Opera. She has guest appeared at other stages as well (Plzeň, Liberec, Musical Theatre Karlín). Her operatic repertoire includes Varvara (Janáček: Katya Kabanova), Dorabella (Mozart: Così fan tutte), Niklas (Offenbach: Les contes d‘Hoffmann), Siebel (Gounod: Faust), Lola (Mascagni: Cavalleria rusticana), Olga (Tchaikovsky: Eugene Onegin), Fyodor (Musorgsky: Boris Godunov), Orlofsky (J. Strauss: Die Fledermaus) and others. As a concert singer, she has performed in the Czech republic as well as abroad (Japan, Canada, Italy, Switzerland and Australia).