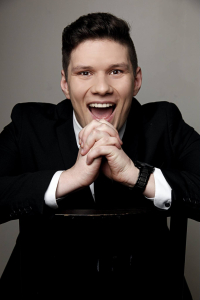 Jiří Rajniš has just been accepted into the Junges Ensamble of the Semperoper Dresden for 2017/2018 and 2018/2019, where his recent roles are: Schaunard in La Bohéme, Morales in Carmen, Fiorello in Barber of Seville, 1. Priester in Magic Flute and Trojanischer Soldat/ Griechischer Führer in Les Troyens.

Jiří Rajniš studied Dramatic Art at the Prague Conservatory and subsequently opera singing at the prestigious UCLA Herb Alpert School of Music in the class of Vladimir Chernov in Los Angeles.

His debut as the youngest Czech "Don Giovanni" abroad took place in Sommer Oper Bamberg2013. In New York City he was engaged as the cover of Belcore in "L´elisir d´amore by the "Martina Arroyo Foundation" , and he also participed in the Couch-Programme of the Metropolitan Opera. He has performed extensively on the concert platform in Germany and in the Prague Spring Festival, he colaborated also with the Bamberger Symphoniker (Bernstein-Peter Pan), ect.
​
He made his debut at the Prague National Theatre in Orff's two acts Die Kluge/Der Mond (season 2016/2017) and continues in (season 2017/2018) as Albert in Massenet's Werther (Production taken from Oper Frankfurt directed by Willy Decker. The title role porforms Piotr Beczala) . And also in the title role of "Eugen Onegin" in the Pilsen - Tyl Theater (2016/2017, 2017/2018),
After Luigi Bassi, the  Giovanni at the opera´s Premiere in 1787, he became the youngest interpreter of the title role to appear on the stage of the Estates Theatre in Prague in July 2016.